All our heartfelt thanks to those in our community who work so hard to help feed our neighbors in need.

The Shoreline Soup Kitchens & Pantries announced it has received a donated 14-foot box truck from the Walmart Foundation.
The new truck, made possible through a $35,000 grant by the Walmart Foundation, will be used for weekly food pick-ups at the CT Food Bank and Gemma E. Moran United Labor Food Bank, transporting food between SSKP's 5 local food pantries, as well as during local food drives. 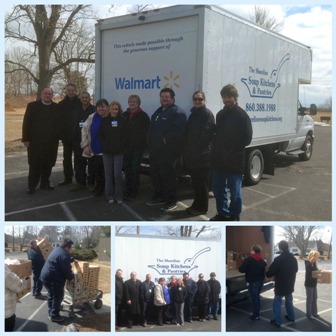 At the Westbrook Pantry scores of volunteers were busy putting out tables full of fresh vegetables, canned soups, bags of beans, pasta, fresh bread and frozen meat, but there was an especially large crowd gathered around the egg table. Everyone was writing a “Happy 90th Birthday” message on a poster-sized photo of Charlie Adams, who was arriving any minute to do what he had done for over 20 years – hand out the fresh eggs. When Charlie arrived, ready to go to work, he was greeted with a chorus of “For He’s a Jolly Good Fellow”, many hugs and handshakes, a giant birthday cake, and the signed birthday poster. “If I’d have known there was going to be such a fuss, I’d have come earlier!” he quipped. 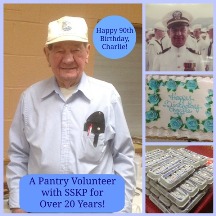 Being a pantry volunteer for over 20 years is just one of Charlie Adam’s many accomplishments. The large photo showed Charlie in 1958, in his white Navy dress uniform, aboard the USS Shangri-La (CVA-38), a 27,000 ton aircraft carrier. Known as the “Egg Man” to his pantry friends, he was “Commander Adams” when he retired from the Navy in 1970, after 28 years, serving in World War II, Korea and Vietnam. While aboard the Shangri-La, one of his primary duties was Carrier Approach Control, where he ensured that planes successfully landed on the flight deck, especially during storms or at night.

His first experience working with eggs was as a 9 year old boy, when his father took over the family farm in Missouri in 1933. “Our plows were drawn by horses back then”, he recalled. “We worked from sunrise to sunset, growing corn, oats, wheat and barley. I had to milk the cows before daybreak.  In high school I wanted to be on the football team, but my Dad said my chores would ‘still be waiting for me’. So after football practice I’d walk the six miles home, and do my chores. At night I did my homework by a kerosene lamp.”

A resident of Westbrook since 1971, he’s a parishioner at St. Marks Church, the host site for the Westbrook Pantry. Charlie remembers the early days, even before the pantry became part of Shoreline Soup Kitchens. In those days, volunteers filled grocery bags which were handed out to those in need. There were small, medium, large and extra-large bags, depending on family size. Today at the pantry guests can choose from a variety of foods depending on their family’s size, needs and preferences.

Charlie also spoke of years past at his “egg station”, when the fresh eggs were delivered in bulk pallets, instead of individual cartons. All week long Charlie and his fellow volunteers would have to collect empty egg containers from their neighbors, and then come early to the pantry to fill them. Although this all had to be done by hand, Charlie proudly claimed, “We never broke a single egg.”

2014 marks the 25th anniversary of the founding of The Shoreline Soup Kitchens & Pantries. “Our volunteers make our mission come alive every day, and have for the last 25 years,” said Patty Dowling, Executive Director. “Week in and week out, their kindness, commitment, and care assure that those in need have a place to turn.  Our community is blessed to have Charlie, and the other 900 or so volunteers, who give of their time, expertise, and good cheer.  On behalf of the guests, volunteers, staff and Board of Trustees, I offer our thanks and warm wishes for those who so selflessly serve those in need, and today to Charlie as he celebrates his 90th birthday.”

The Women’s Exchange of Old Lyme presented a donation of $1,000 to The Shoreline Soup Kitchens & Pantries (SSKP) to purchase food for distribution to those in need along the Connecticut shoreline.  The donation was presented at SSKP’s Old Lyme Pantry to manager Marie Farrell. This pantry, located at the First Congregational Church in Old Lyme, distributed enough food for over 273,000 meals in 2013.

The Women’s Exchange began over 180 years ago, offering craftswomen across America a place to sell their handmade goods, to bring in extra income. Over the years, many of the artists who sold their crafts at Women’s Exchanges did so to help put food on their families’ table. Today only 19 remain, and one of these is a shop in Old Lyme called The Lyme Tree continues this. With this donation SSKP will be able to provide enough food for 2,380 meals for local families struggling with poverty and food insecurity.

“We are so grateful for the support of the Women’s Exchange of Old Lyme,” said Patty Dowling, executive director of SSKP. “Because of their tradition of charity and opportunity, we are able to make a place at the table for those in our community who are in need.”

Coldwell Banker CARES Foundation, the charitable arm of Coldwell Banker Residential Real Estate, has given two donations totaling $4,800 to The Shoreline Soup Kitchens & Pantries (SSKP) to support their work feeding the hungry of the shoreline.

The donations, presented at SSKP’s Old Saybrook Pantry and at the Essex office of Coldwell Banker Real Estate, represent many gifts made by individual local realtors who are focused on charitable giving in the local communities where they work.  Participating Coldwell Banker associates make a donation to the Coldwell Banker CARES foundation from every closing real estate transaction, as well as through fundraising events.

“The support SSKP receives from Coldwell CARES is especially thoughtful, as it represents many individual donations and fundraising events held throughout the year. Their generosity assures that those in our community who are in need will have a place to turn for food and fellowship in these difficult economic times.  These funds will provide enough food for 11,430 meals for those who attend one of our pantries.  On behalf of those we serve, who experience a community that cares deeply each time they attend a pantry, I thank Coldwell CARES for answering the call of those in need on the shoreline,” said Patty Dowling, executive director of SSKP.

The children of the Clinton Child Care Service learned you’re never too young to start giving back! They recently held a bake sale, and with the proceeds gave a $90.00 contribution to The Shoreline Soup Kitchens & Pantries. Part of the experience included a visit to the Center by SSKP Director of Development & Outreach, Claire Bellerjeau.

“Although some of the children were very young, they seemed genuinely interested in learning about our food pantries and meal sites, and how everyone can do their part to lend a hand to their neighbors in need,” said Ms. Bellerjeau. “This year at SSKP the cost of a meal is 42 cents, so the children learned that their bake sale would provide enough food for 214 meals.  A great math lesson – and life lesson, too!” 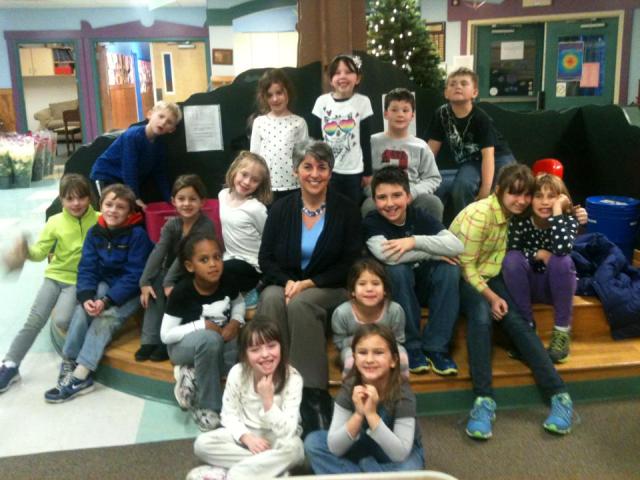